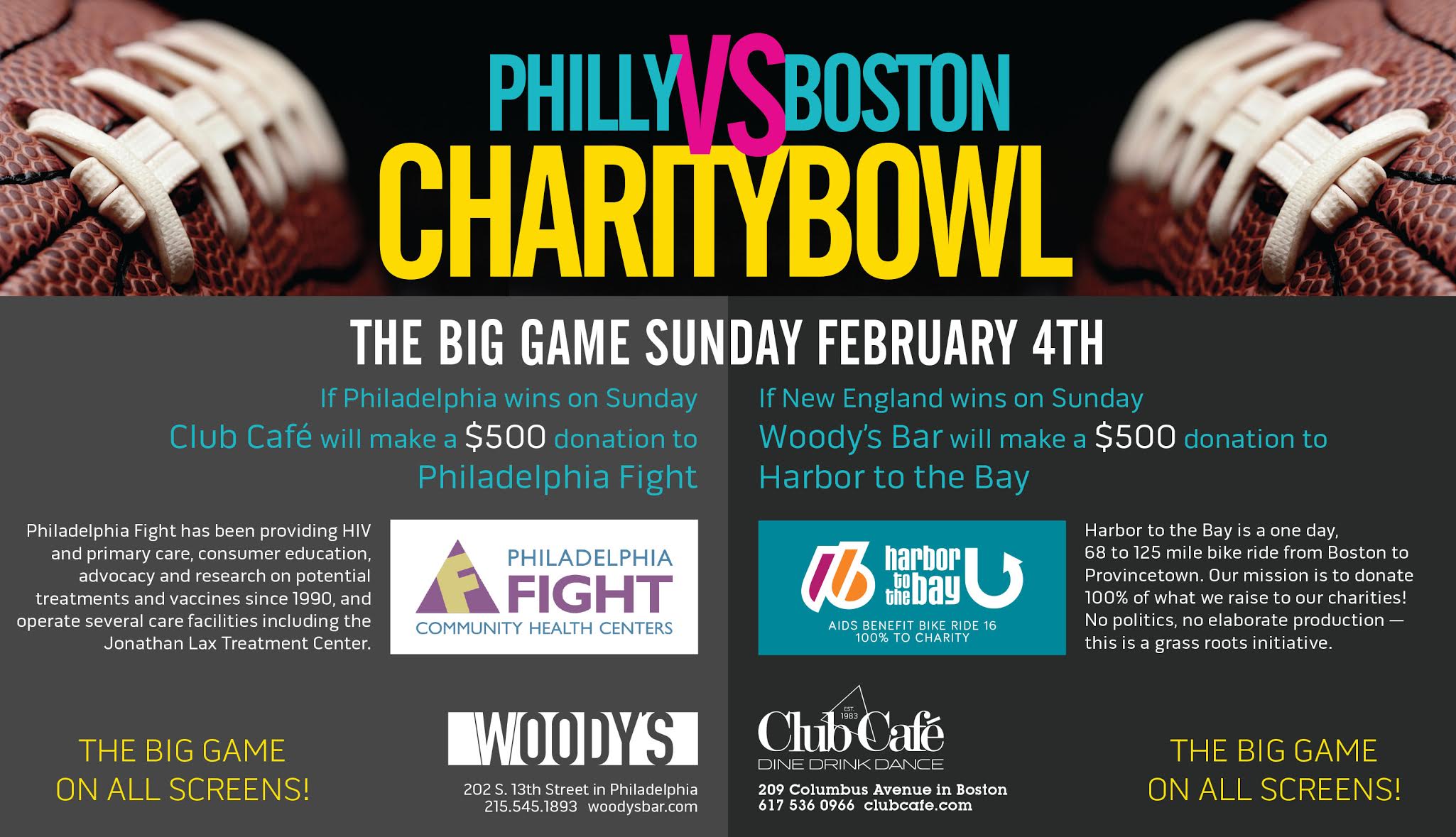 Philadelphia & Boston- Two historic LGBTQ venues: Woody’s Bar in Philadelphia, and Club Cafe in Boston, have made a friendly wager.  If the Eagles win the Super Bowl on Sunday, Club Cafe will make a $500 donation to Philadelphia Fight; but, if the Patriots should win, Woody’s Bar will make a $500 donation to Harbor to the Bay.  “All of Philadelphia is excited about the Eagles in the Super Bowl, and that includes the LGBTQ community,” said a member of the Woody’s Staff and Management who placed the bet.  “This was a great way to not only show our support of the Eagles, but also to bring attention and funding to important causes in both cities.”

Woody’s Bar in Philadelphia was founded in 1981 and has grown to become the largest LGBTQ bar and dance club in the city.  Club Cafe, was founded in 1983, and is one of Boston’s premier LGBTQ dance clubs and dining destinations, so it was a natural choice for these two venues to come together.

General Manager, James Morgrage accepted the bet on behalf of Club Cafe, “We are very happy to accept the challenge, and are happy to support Harbor to the Bay, a Boston, all-volunteer AIDS Benefit Bike ride which has raised more than $5.2million for several important LGBTQ organisations.”

“I think it is TERRIFIC,” said Jane Shull, Chief Executive Officer of Philadelphia Fight. “What a great thing to use everyone’s excitement of our sports teams to build awareness of important issues like HIV and community health services.”  Philadelphia Fight has been providing primary care, consumer education, advocacy and research on potential treatments and vaccines since 1990, and operate several care facilities including the Jonathan Lax Treatment Center.

Members of the press are invited to contact the following for additional information:

Club Café was founded in 1983, has been voted Best of Boston repeatedly, and  from the very beginning has been the center of the Gay Community of Greater Boston. Often referred to as Boston’s unofficial LGBTQ Community Center. Visitors from all over the world make Club Café one of the first places to visit when in Boston.  Dine /Drink/Dance, or come enjoy some of the finest of local cabaret entertainment, or one of our locally produced main stage shows. Then dance the night away to themed nights with Boston’s best DJ’s.  Visit clubcafe.com for more information.

Since it opened in 1981, Woody’s Bar has been at the center of the Philadelphia “Gayborhood.”  Over the years, Woody’s has grown to become Philadelphia’s premier LGBTQ destination with FIVE different DJs in different themed rooms to fit every musical taste.  Recently, Woody’s launched 36 beer taps, the most of any LGBTQ bar in the city.  When in Philadelphia, we hope you’ll come and visit Woody’s, a Philadelphia tradition.  Visit woodysbar.com for information about our different themed nights, and a calendar of the best DJs in Philadelphia.